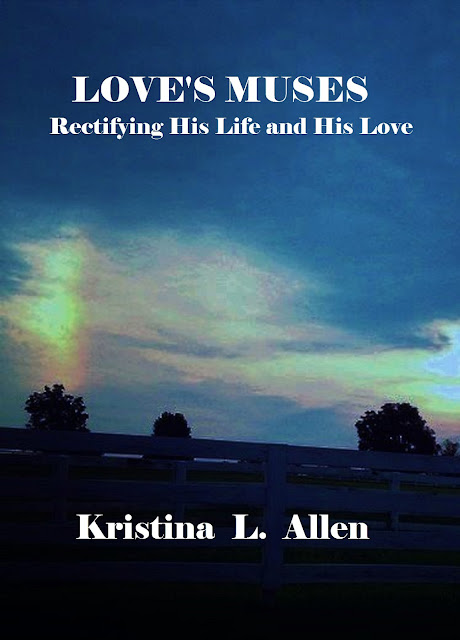 LOVE’S MUSES
Rectifying His Life and His Love
Book 3

This is a work of fiction. Names, characters, businesses, organizations, places, events and incidents either are the product of the author’s imagination or are used fictitiously.  Any resemblance to actual persons, living or dead, events, or locales is entirely coincidental.
This book contains adult language and adult themes and is not intended for younger audiences.

Dedication
To all the artists who carried me through the worst years of my life, who gave me hope, inspired a deeper love for GOD, and who inspired characters in this book.


PROLOGUE
Katie Lynn Moore popped into Nick Thomas’s life one night in one of his meet and greet lines in lieu of her niece, who at the last moment, before meeting her idol, got cold feet. When Katie first touched him, she lit him up in a brand new way with the jolt-giver’s touch that he had heard so much about from his grandfather. When Nicolas Paul finally put to rest the Prince Charming act, Katie fell crazy in love with the sweet boy from Nashville, labeled by her as a grandfather’s treasure.
Katie’s love and devotion to a terribly depressed and contrite former fiancé kept her from a new and exciting love with her Nicolas Paul. She vowed to return to him when her beloved deputy was back up on his feet and could accept with grace, the truth that his Katie-bear would never be his Mrs. Wells.   Six months after they fell madly in love, fear of a repeated broken heart, kept this widow from returning to her second, even greater love. Fast forward two years later, and superstardom had taken Nicolas Paul, altering the sweet country boy into an overindulgent, alcoholic playboy with groupies vying for time between the sheets with him, which he was all too willing to oblige.
The book that Nicolas Paul had inspired Katie to pen that night became a record-setting viral book, and had catapulted this shy kindergarten teacher to instant fame against her will. A fierce rivalry began between the superstar and the freshman viral author, whom Nick thought was just some out-spoken obscure author, unhappy with his public persona.
LOVE'S MUSES Rectifying His Life and His Love picks up in a trauma center in Lexington, Kentucky. Nick’s drug-induced sleep brings him back to the Embassy Suites Hotel’s empty dining room, where Katie told with vivid detail, the long-awaited story of her "Operation Rescue Fair Maiden from Stalker." Nick awakened lost and despaired with a broken and contrite spirit. Days later, at his favorite place, his Gramp's story of his own comeback from a fatalistic error in judgment fueled Nick’s own comeback, as he prepared for his next tour, his Apology Tour

JEALOUSY IS A TWO WAY STREET

The date was February 15th, the day after the second consecutive birthday that Nick Thomas had ruined for Katherine Lynn Petersen Moore, whom he called his one and only jolt-giver, and with whom he had fallen crazy in love two birthdays prior to this one. He had haphazardly taken liberties and used his power as her deliverer of the shiver to bowl over his one true love, his teacher in the pink hat, less the pink hat, now.  Nick’s best friend, Shawn, with whom he was at odds, had advised his older sister, Annie, to finish the job Katie had started, obliterating Nick’s cocky confidence in the shiver factor. Taking Shawn’s advice that morning, while Nick laid in his Hospital bed at the University of Kentucky Albert B. Chandler hospital, with a severe concussion, Annie Beth Thomas McDaniel, completed the mission of humbling her younger brother. She informed him of a little known fact that the shiver factor, or jolt-giver’s touch, labelled by their Grandfather, was what pushed Annie into the comforting and secure loving arms of her current husband, Raymond McDaniel, instead of who was her first true love and jolt giver, Buddy Asher. Like her mother, Annie chose to go with the security of a good solid and humble man, rather than the instability of a jolt-giving artist, who had caved twice to the tempting groupies, always vying for time between the sheets with their idol.
Nicolas Paul Thomas lay in his hospital bed on the third floor, with his beloved jolt-giver two floors up, and for the first time since this whole disastrous evening began, he was getting the restful sleep his body needed by way of strong narcotics, yet his mind was as awake or even more awake than it had been in over a year.  In his restful sleep, the memories of that wonderful story "Operations Rescue Fair Maiden from Stalker,"  became as new to him as it was the night he heard the story two years ago in the wee hours of the morning of the  best first day of his life with the new and only love of his life.
With vivid details and a precious tender spirit, Katie shared of the love and acceptance she found in Matthew’s family that she never found in her own. Katie paused a moment, closing her eyes, breathing slower as she pictured the scene, revisiting one of the more wonderful times of her life that summer of her 19th year, after the first semester of her first year of college, living as a permanent guest in family home of her newest best friend, Matthew Joseph. Moore, twin brother to the love of her life, Michael Jeffrey Moore with their parents Mark and Marjorie Moore in Duxbury, Massachusetts.  She took in a deep breath, then let out a long sad sigh as her memory took her back to that very special summer, the best summer of her entire life. The projector began in her head as she laid out the entire scenario in vivid Technicolor for Nick, as she did with all her stories that night.

“We spent so much time at the Rathskeller that summer, but that one day was the day I had just had enough, and my friend Bradley put into play the little green monster, the one that inadvertently sent Michael packing.”

Katie nodded as she drifted off into the past.


Michael hung back at the bar to partake in drowning some of the same spirits he served with one of the girls who hoped she would be the one with Michael that night, but instead found herself getting her ear bent from Michael about a different girl. When he did not come home for hours, Katie and Matthew assumed that his jealousy would end up with some angry sex on the brown couch, which made it look like he had returned to his old ways, or never left them.

Chapter 2 MORNING HAS BROKEN AT THE MOORE ‘S

Chapter 29 MOORE PEPSI AND LESS COKE   Katie scudded down the driveway toward the cruiser. Guilt had left her presence, only anger and...

Kristina L. Allen
Kristina has a different take on life, love, loss, and GOD, because she's lived a life that has been extraordinarily painful. She tells it like it is, the good, the bad, and the ugly, and last but not least, the funny!